The Evolution of StretchBot: Lessons Learned

So less than 3 weeks ago we released StretchBot to the mobile world and we have been blown away with the reception and feedback. We spent a lot of time polishing off the game before we finally released it but we learned that a game can always get better, games are made to evolve. We listened to the feedback our players provided and have made several updates to the game because of it.

What is fun because it's difficult and what is annoying because it's difficult?
Over the years while working on StretchBot it was easy to become numb to aspects of the game. Our team has played the game over and over again. So we take new player feedback seriously because they have a perspective we no longer can. One tidbit that came up again and again was that the first boss in the junkyard was too hard.

Players were still adjusting to the game and getting past this level was a major blocker. We took this criticism graciously and we optimized the boss. We removed some obstacles and added new behaviours that made our bosses not only easier but more fun to fight!

There are a lot of different phones out there.
We tested StretchBot on many different devices of varying sizes and shapes but you can't test it all. We are proud of the fact that we made StretchBot virtually globally accessible across all devices without any loss of experience. As it took us over 2 years to complete the game new technology never stopped being released and new phones with greater resolutions and bigger screens arrived on store shelves. A few players with these devices found that the buttons were not always in a comfortable position on the screen. This is why we are happy to introduce a new customizable controller feature in our newest update. Now players can choose where the the buttons are on their screen and the defaults are placed in more convenient spots from the get go. We think this feature will really add to the gameplay because we want our players to have a natural and immersive experience when playing StretchBot.

We learned a lot while making StretchBot and we are continuing to learn as the game makes its way onto peoples devices around the world. We are extremely thankful for all the amazing comments and suggestions we have received and we are excited to see how the game evolves with our player base. Thanks again for playing and we hope you enjoy the new features and gameplay!

We want to get StretchBot into the hands of as many players as possible. After the hullabaloo of releasing StretchBot on mobile last month you might think that we were ready to take a break but quite the opposite! We decided to get straight back to work and port the game for the big screen!

We have added universal gamepad support and now you can really feel like you are playing StretchBot on the classic 90's console of your choice. The Steam release will take place on Feburary 5th, 2020 and the soundtrack will also be available through Steam as a bundle or sold separately. You should start seeing Twitch gameplay and other streaming content by the end of the month leading up to the release. Add StretchBot to your Steam Wishlist today!

StretchBot is available on iOS and Android!

Today is the day! StretchBot has now been released on both iOS and Android and you can find it on the app stores! It was a long journey, the game took many forms during its development and evolved so much. We designed, redesigned and redesigned again the core engine and mechanics of the game until we felt like we could offer the best and most fun experience possible. We want to thank every person who playtested, gave feedback, or supported us in other ways during this massive project. We are proud of what StretchBot has become. We are excited to release it to the world of players. We hope that we have delivered a game that will scratch that classic platformer itch and that it will transport you back to the heyday of console gaming! Keep checking back because we have some BIG announcements coming in the new year! Happy Holidays and Happy Stretching!

It's finally here! We are excited to share with you the official launch trailer of StretchBot. Our 16-bit steam-based adventure platformer also now has an official release date. After nearly 3 years of development StretchBot will be officially available on both iOS and Android in 6 different languages on December 17th 2019!

Leading up to the official release there will be a lot of new content shared and contests so make sure to follow us on instragram, twitter and facebook to not miss out! We here at M5 Games want to thank all our fans for their support through development and we can't wait for you to finally get to try your hand at defeating Kid Scientist and his cast of evil bots!

Stretch: "Oh brother. I don't think this is the dining car." 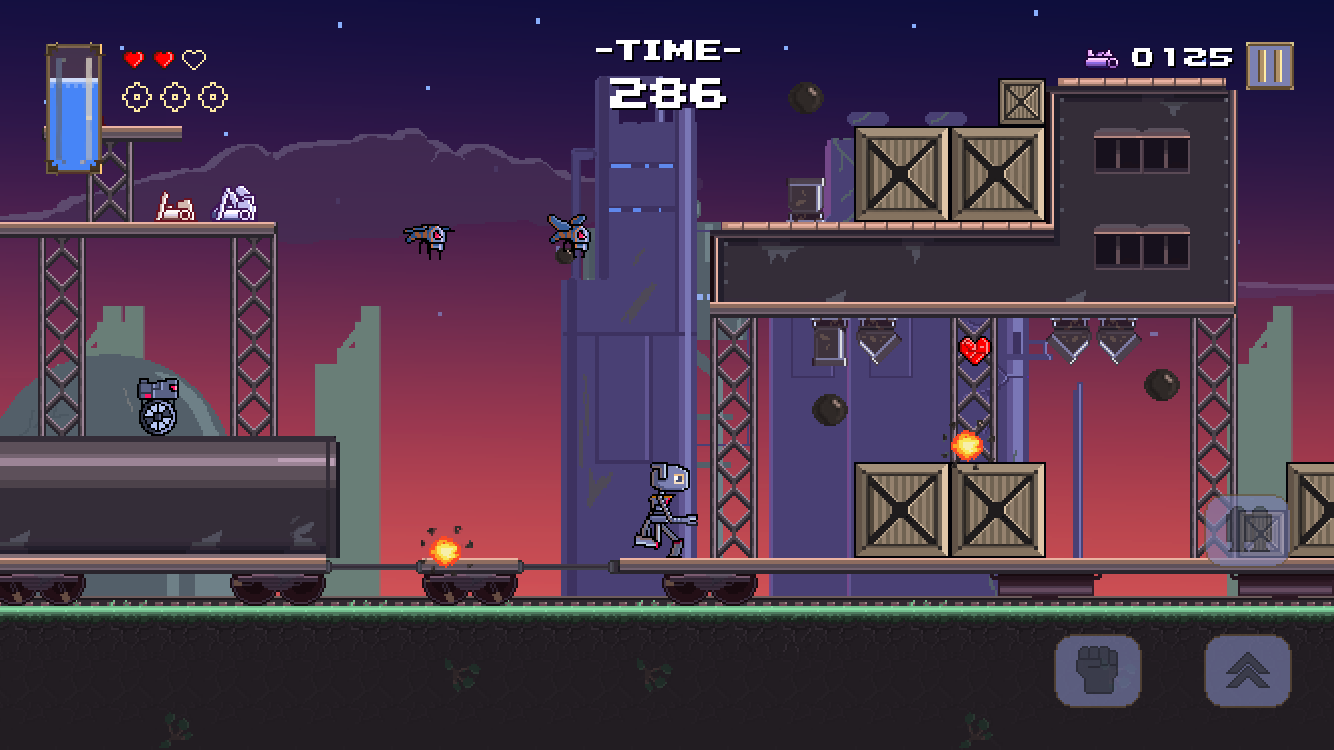 A junkyard is the last place I'd want to hang out in. 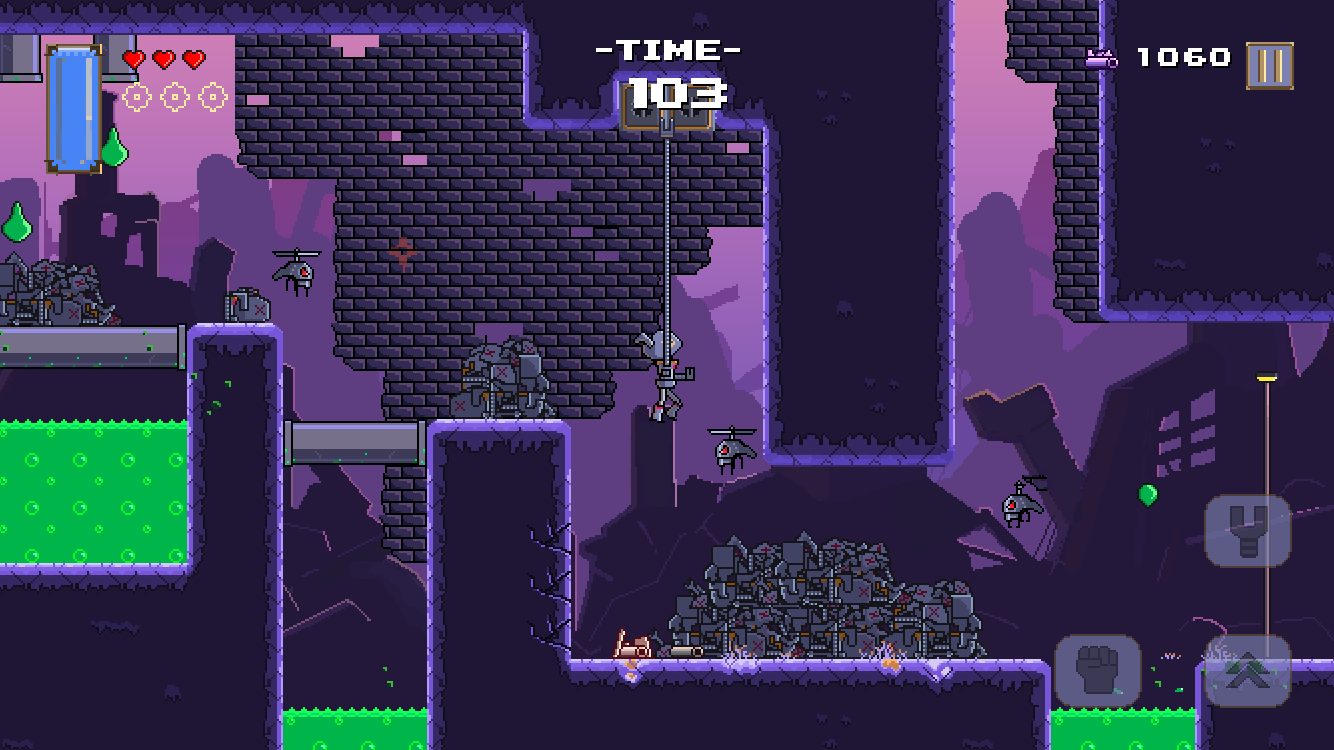 Incoming! That acidBot is belching an acid blob! 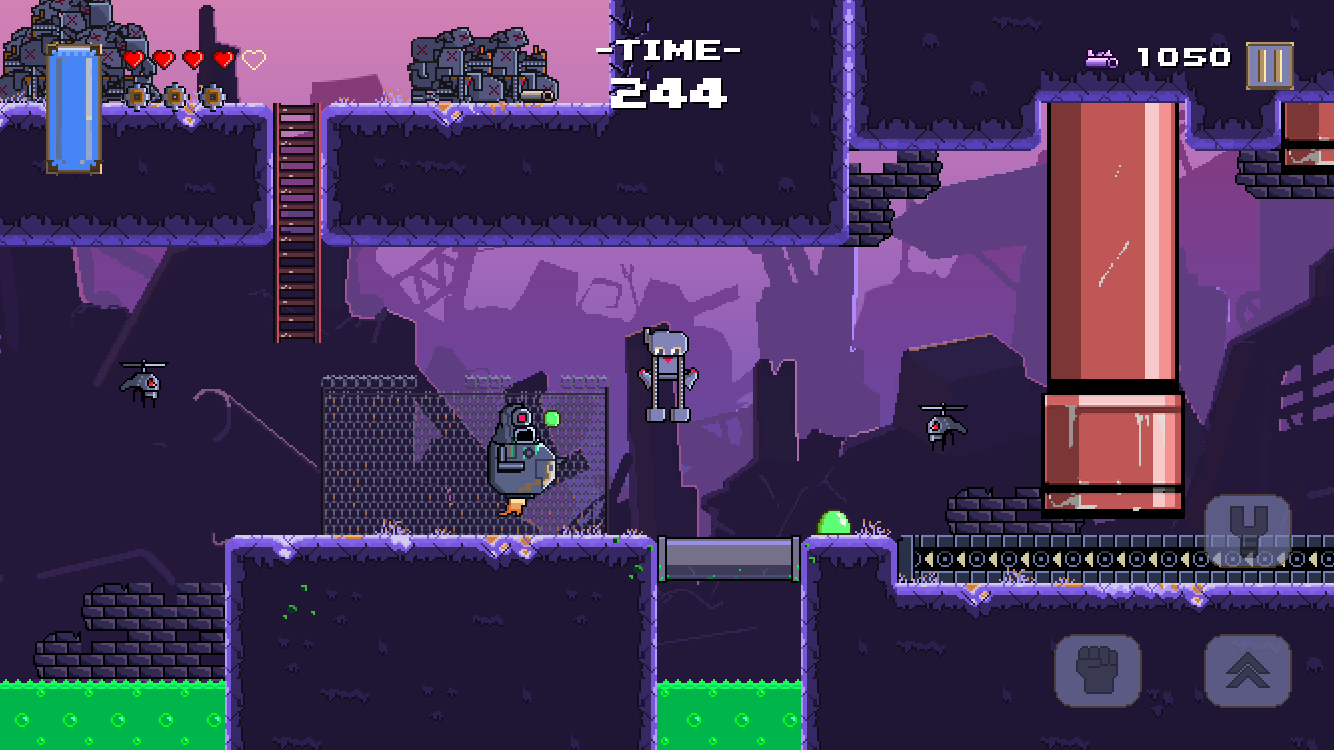 Hang on Stretch! You're almost through the kids factory. 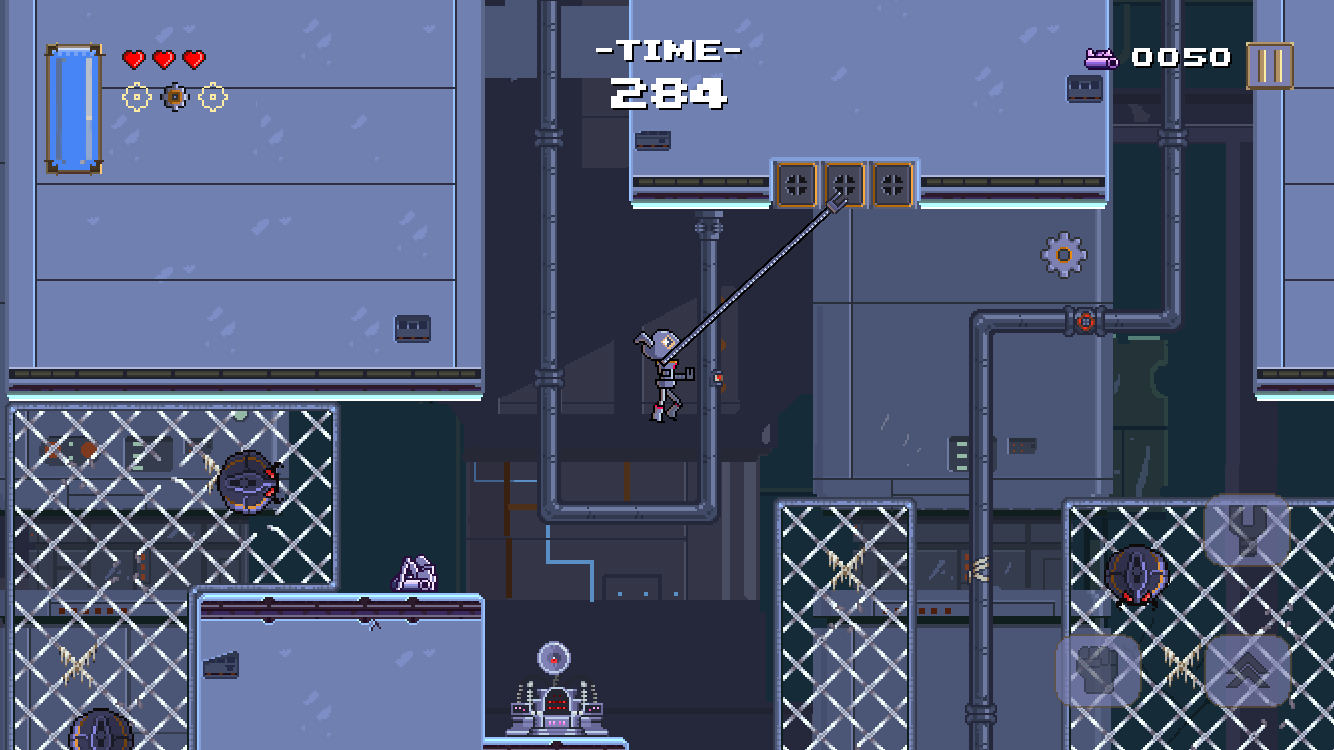 The propeller bots are no match for Stretch's steam blast! 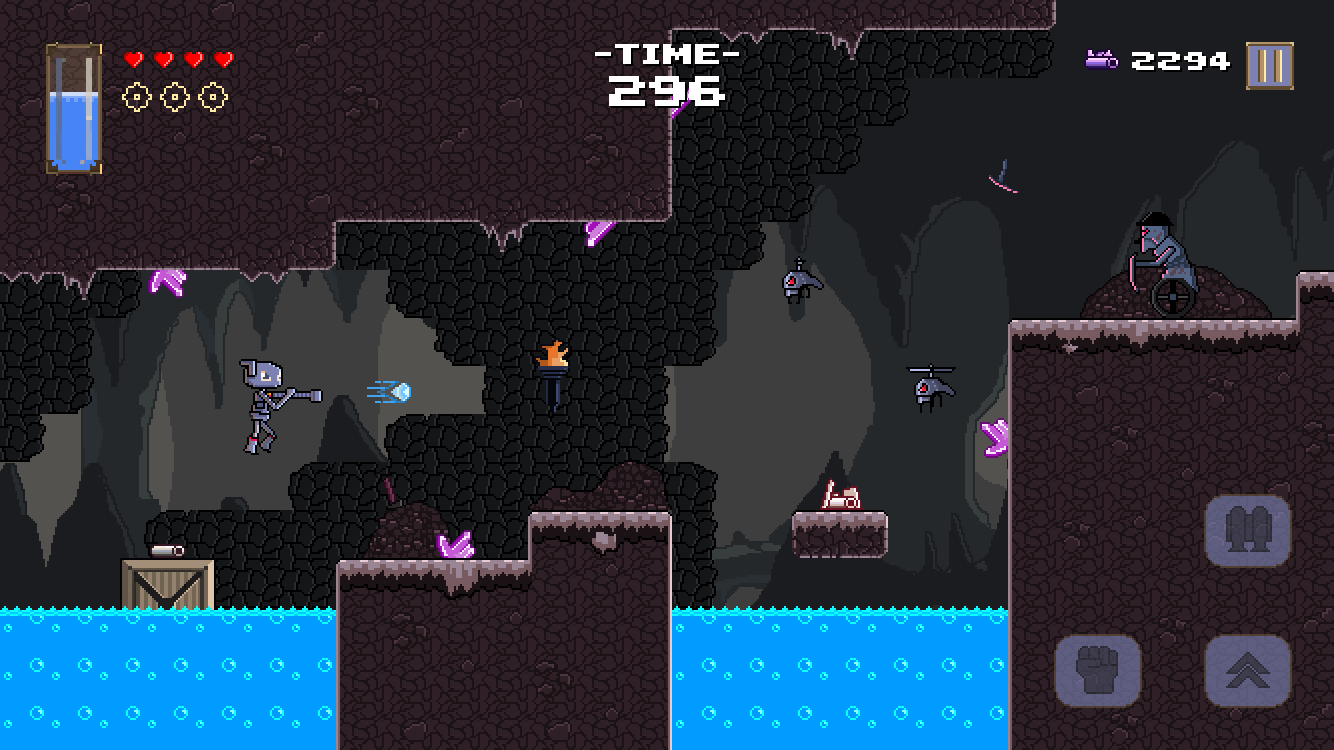 The kid processes massive amounts of crystal at his factories to the west. 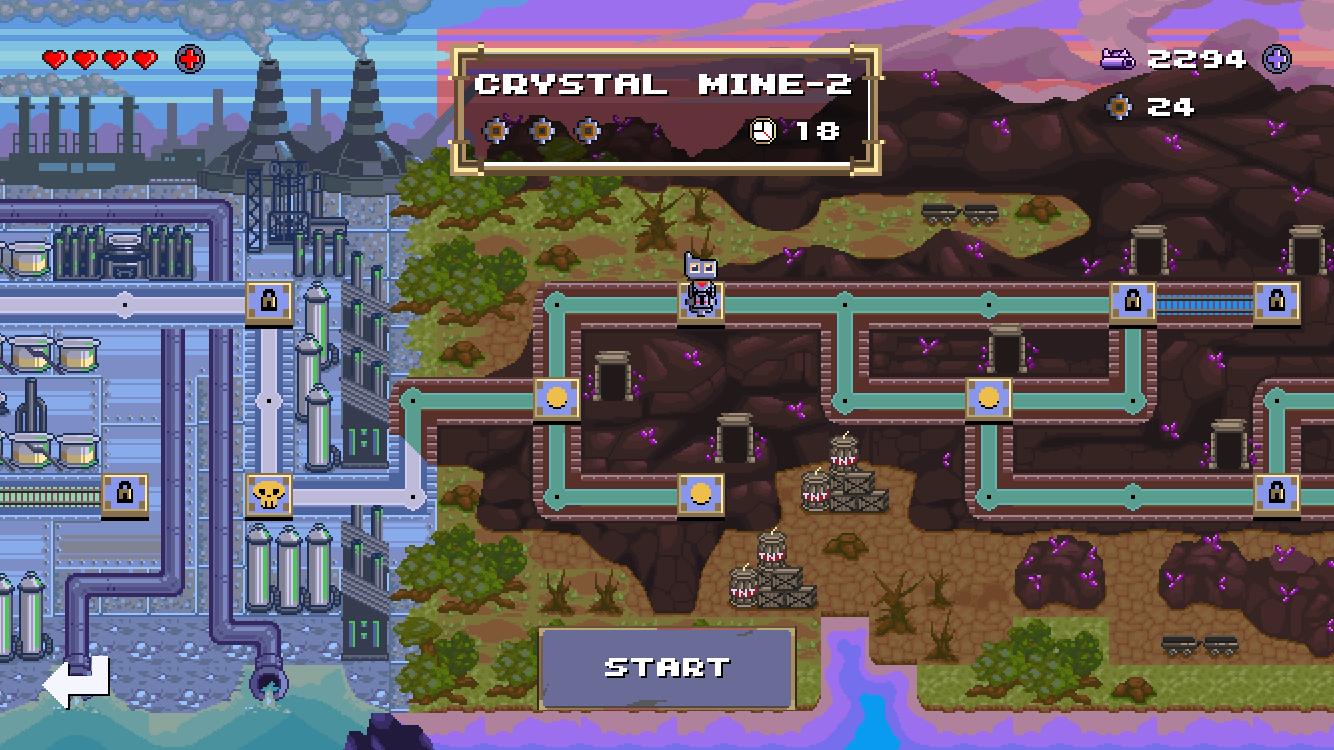